Passion for the Game 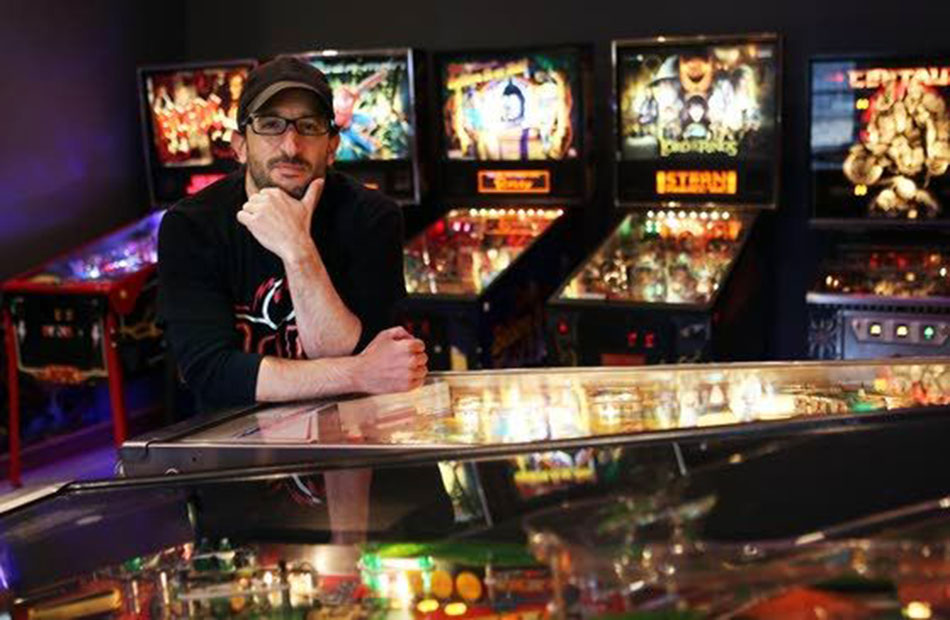 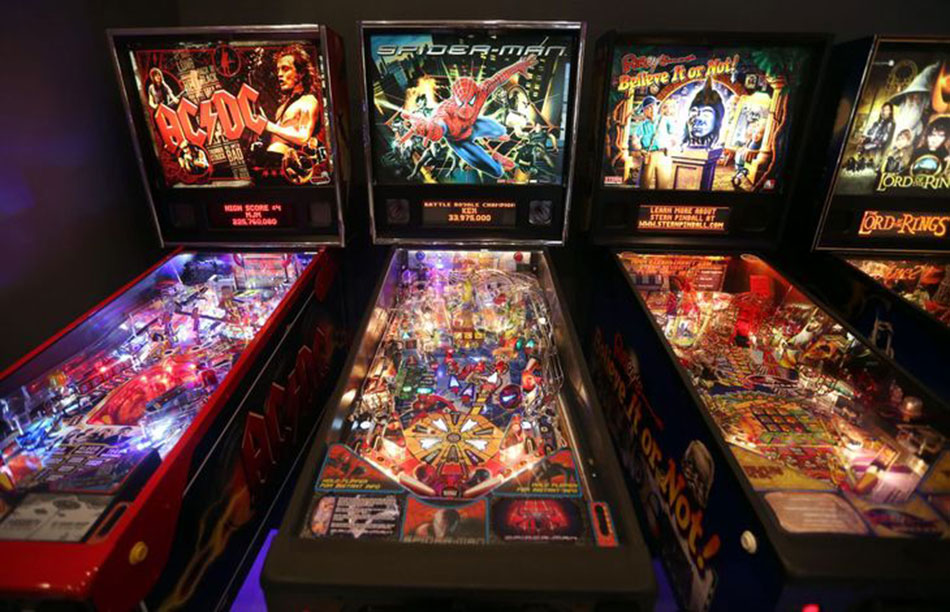 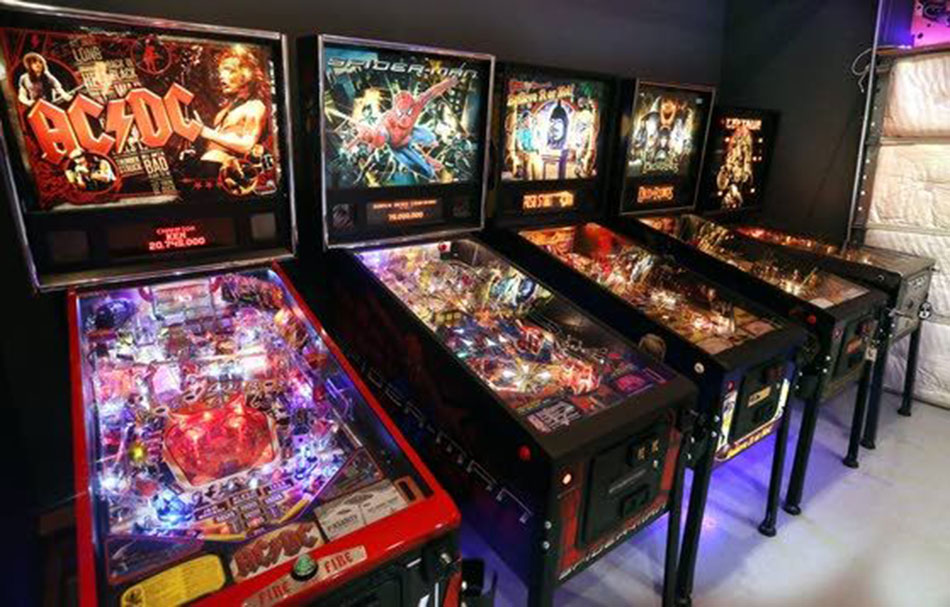 When Ken Rossi takes on a pinball machine, he’s not interested in showing off.

While some arcade experts like to demonstrate how they can use a machine’s flippers to send the silver ball anywhere on the table, setting off bells, whistles and flashing lights in a flashy display, Rossi concentrates on racking up the most points he can as fast as he can.

But more than that, Rossi leads a secret double life. As the founder of the South Jersey Pinball League, he is the East Coast’s most passionate pinball advocate.

The mild-mannered Somers Point resident hosts one of the biggest tournaments in the state, Pinsanity, at his home. He also owns Evolve Studios, a graphic design and web development company, and creates his own popular posters for the tournament. Pinsanity posters sell out quickly and have been purchased by fans in France, Australia and other countries.

The tournament itself is much the same.

“Thirty-six people attended last year,” said Rossi, who also is the state’s representative for the International Flipper Pinball Association. “Once it is announced, it will sell out in 10 minutes.”

Rossi has been playing pinball since he was a high school student in Pennsylvania who spent his summers in southern New Jersey. He remembers playing pinball with one of his buddies in the 1990s at the former Aquaport Arcade on 34th Street in Ocean City.

“We gravitated towards pinball for whatever reason. Everyone else played arcade games, but pinball was our thing,” Rossi said.

When Rossi and his friends got a little older and had some money, they began buying pinball machines.

One day in 2008, Rossi was sitting at the bar at what is now Fitzpatrick’s Deli & Steakhouse in Somers Point and saw a Theatre of Magic pinball machine. It was a game he played all the time when he was younger. He started to play it again with his childhood friend, Jamie Kelly, who also lives in Somers Point.

“I said, ‘I have to buy one of these things. Someone has to have one,'” Rossi said. “I went on Craiglist. I went on a couple websites (to buy his first pinball machine).”

Rossi found he had the skill to repair broken pinball machines. So he began to find bargains, buying broken games and repairing them.

Currently, Rossi has a collection of 14 pinball machine in his garage. They include names familiar to pinball fans: Bally Centaur, The Lord of the Rings, Ripley’s Believe It Or Not, Spider-Man, AC/DC, Creature from the Black Lagoon in 3-D, Bram Stoker’s Dracula, Corvette, World Cup Soccer, Airborne Avenger, Special Force, Williams High Speed and Gottlieb’s Surf Champ.

“In 2008 or 2009, pinball was just starting to get its legs again,” Rossi said. “From 2009 until now, pinball really exploded as far as the competitive scene goes.”

“I know since I started playing competitive, it has jumped to almost 40,000 competitive players in the world, but I think when I started it was 20,000 or 15,000. It has doubled within the last five years.”

“It’s not just banging the ball around and scoring points. There is strategy. There are rules. There is a lot of skill,” Rossi said. “A lot of people come in here, and they just think, ‘Oh, I just thought you kept the ball in play,'” he said as he looked around his garage. “It’s really a lot deeper than that.”

And even with as much experience as he has, Rossi said he still gets stressed and can feel the nerves when he is playing competition pinball. “There is a lucky aspect to pinball,” he said.

Rossi’s first Pinsanity tournament was held in 2012. The idea was to make it an event, and that’s where the posters came in. T-shirts and hats soon followed.

“Now, I see people at other competitions wearing my Pinsanity T-shirt. There is not a lot of money to be made, but it is a lot of fun.”

Rossi’s garage tournament has been joined by another Atlantic County tournament in Galloway Township to form a two-day event. Pinsomnia starts at 8 p.m. May 20 and lasts until 2 a.m. Pinsanity will be held on May 21.

Russell Myers, 47, of Linwood, has known Rossi for five years and has been into pinball for at least 10 years. They met through the online pinball community. He, Rossi and Mark Levine of Galloway Township are three of the biggest pinball enthusiasts in the area, he said.

Certain areas of the country are known for pinball: California, the Chicago area (where most of the pinball manufacturers are located) and the tri-state area of New York, Pennsylvania and New Jersey, Myers said.

“Pinball is an entirely American phenomenon,” said Myers. During the 1930s and 1940s, it was considered a form of gambling.

He said one of the advantages pinball has over video games is that the game can change. Every time you play a video game such as Pac-Man, the game is the same. But pinball has more variables.

“Pinball is an analog machine. You can physically nudge the cabinet and hit the flippers. Every single game is different,” Myers said.

This website uses cookies to improve your experience while you navigate through the website. Out of these cookies, the cookies that are categorized as necessary are stored on your browser as they are essential for the working of basic functionalities of the website. We also use third-party cookies that help us analyze and understand how you use this website. These cookies will be stored in your browser only with your consent. You also have the option to opt-out of these cookies. But opting out of some of these cookies may have an effect on your browsing experience.
Necessary Always Enabled
Necessary cookies are absolutely essential for the website to function properly. This category only includes cookies that ensures basic functionalities and security features of the website. These cookies do not store any personal information.
Non-necessary
Any cookies that may not be particularly necessary for the website to function and is used specifically to collect user personal data via analytics, ads, other embedded contents are termed as non-necessary cookies. It is mandatory to procure user consent prior to running these cookies on your website.
SAVE & ACCEPT